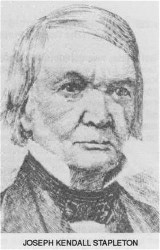 Joseph K. Stapleton was born in Philadelphia, Pennsylvania, in 1781. When he was nine years old his family moved to Baltimore, Maryland, where he learned the trade of brush making, which he followed during his business career.
He was Captain of the 39th Regiment and saw action at North Point on September 12, 1814. He died on April 1, 1853, and was buried in Greenmount Cemetery. The funeral was attended by members of the Grand Lodge, Grand Chapter and Grand Encampment. The services were conducted by Charles Gilman, Grand Master of the Grand Lodge.
Sir Knight Stapleton was raised in Concordia Lodge No. 13 at Baltimore, Maryland, and was the Worshipful Master in 1810. In 1815 he assisted in the organization of Phoenix Lodge No. 56 and was Worshipful Master of this Lodge. In 1835 he returned his membership to Concordia Lodge. He was active in the Grand Lodge but never occupied the higher official stations.
He was exalted in Concordia Chapter in 1810 and in 1816 became a charter member of Phoenix Chapter, over which he presided for many years. For twenty-five years he served as Grand High Priest of the Grand Chapter of Maryland and the District of Columbia. In 1829 he was elected General Grand Scribe of the General Grand Chapter and served three terms. In 1838 he was elected Deputy General Grand High Priest and served in that capacity until 1850.
He received the Orders of Knighthood in Maryland Encampment No. 1 at Baltimore some time prior to 1828, as he was elected Grand Master (Eminent Commander) in June, 1828, to serve out the unexpired term of Sir Knight Philip P. Eckel. In 1829 he was reelected to the same position.
In 1835 he attended the Triennial Conclave of the General Grand Encampment held in Washington as the representative of this Commandery. He was elected Deputy General Grand Master, which office he was to hold for fifteen years. During this period he was active in establishing many new Commanderies.
At the Conclave of 1850, the following resolution was adopted:
“Resolved, That in consideration of the long, able, and faithful services of Sir Joseph K. Stapleton, in the various offices which he has held in this General Grand Encampment, that a jewel of the Order be presented to him and that the General Grand Treasurer procure the same.”
Grand Master Hubbard reported his death at the Conclave of 1853, stating:
He has kept the faith’ as a valiant and magnanimous Knight, and has now left us and our earthly tabernacles.”