In some Grand Commanderies honor cords, badges, or distinctive medals are utilized to recognize accomplishments or achievements by Sir Knights within their respective Grand Commandery jurisdictions. This article will focus on the items or awards used by the Grand Encampment to recognize merit and eminence. In July of 2019 the awards were redesigned and a new award, the Grand Commandery Meritorious Service Medal, was created. It should be noted that current holders of the redesigned awards have the option of retaining the old award or purchasing a new one from the Grand Encampment Grand Recorder.

We will begin with the oldest of the awards. At the 47th Triennial Conclave held in 1958, the Awards Committee made a recommendation to create an award entitled “Knight Templar Cross of Honor” (KTCH) to be given to one member per state per year. This was referred to the Templar Committee on Jurisprudence to be written in proper form and to be reported upon at the next Triennial Conclave. For whatever reason, the award was not finally approved until the 49th Triennial Conclave held in 1964. A description of the KTCH and the criteria for its awarding is found in Section 237(b) of the Grand Encampment Constitution, Statutes, Disciplinary Rules, Standing Resolutions, Ceremonies, Forms and Approved Decisions. In summary, these are: An award consisting of a gold medal upon the center of which shall be a Patriarchal Cross in purple. Around the cross shall be inscribed the words “Knights Templar Cross of Honor.” A lapel pin in the form of the medal as described above shall also be provided. A suitable certificate of award shall be issued by the Grand Encampment and signed by the grand master and the grand recorder bear ing the seal of the Grand Encampment and thereon shall be set forth the citation. A nomination for the award shall be made by the Commandery of which the nominee is a member by a motion adopted by the Commandery and must be submitted in writing and approved by the grand commander of the respective state. The award shall be made only for exceptional and meritorious service rendered to the order, far beyond the call of duty, and beyond the service usually expected of an officer or member. No present or past elected grand officer of a Grand Commandery shall be eligible for the award. One nomination may be made from each Grand Commandery, regardless of the number of members, plus one additional nomination may be made from a Grand Commandery for each 5,000 members or major fraction thereof, during any one year. No posthumous awards shall be made.

Section 237(c) of the Constitution provides for a National Award. This is an award which is given by the Grand Encampment at each Triennial Conclave. It is awarded to a person – not necessarily a Knight Templar – who has made an outstanding contribution to our country through civic, professional, military, scientific, religious, etc., endeavors. Nominations for the award may be made by any Commandery or Sir Knight. Nominations are to be made to the grand master who may either refer the nominations to a special committee or have the Grand Encampment line officers choose the recipients. The Grand Encampment line officers or the special committee may at their discretion determine the criteria for the award. The award consists of a framed certificate and a Lucite obelisk appropriately inscribed and with the recipient’s name. 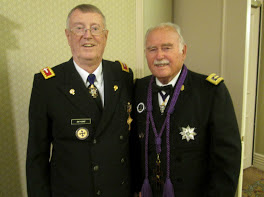 Before presenting the next set of awards, a bit of history may be instructive. At the 59th Triennial Conclave in August of 1994, the then Most Eminent Grand Master William H. Thornley, knew that the Grand Encampment had no means of recognizing a member of the order for continued service to the order, service to Freemasonry, service to the community, or service to mankind. Several Grand Encampment officers, both past and present, were of the opinion that some tangible means of recognizing such service should be available to the Grand Encampment, much the same as the honors that were awarded for service in other Masonic Bodies. At the suggestion of the officers and other interested Templars, MEGM Thornley was asked to design three awards: The Knight Commander of the Temple (KCT), the Companion of the Temple (CT), and the Knight Grand Cross of the Temple (KGT). With the active and past grand officers of the Grand Encampment acting as a cadre of Knights Grand Cross of the Temple, a minimum of five members of the order were nominated in each of the Grand Commanderies, based on the requirements noted above. These were then voted upon and those who passed the ballot were invited to accept the nomination as Knight Commander of the Temple. These included candidates from each of the four service categories. A similar procedure was followed for the first Companion of the Temple recipients. This was done several times during the next three years, each time including those Knights Commander of the Temple from each Grand Commandery who were already members.

An additional recognition is the Companion of the Temple (CT) award. Companions of the Temple may be nominated in the same manner as listed above for the KCT but are not subject to any numerical limitation. All nominations must be made through the deputy or deputies for the program with no exceptions. As with the KCT, any member of the College of Honors may nominate any suitable person for the Companion of the Temple with the same guidelines as listed for the Knight Commander of the Temple award. However, the recipient need not be a Knight Templar or a Mason. Both men and women are eligible for the CT award. In a similar fashion as used for the KCT, all Companions of the Temple are to be invested with the honor, utilizing a format or ceremony designated by the deputy or one de- vised by REPGC George Marshall, Jr. and approved by MEPGM Koon during his tenure as grand master. The jewel of a Companion of the Temple is shown above. It is to be pinned on the left side of a dress, blouse, or sweater for ladies and a blazer or suit coat for men. The design of this award has not changed, except that it may now be ordered with either a pin or magnet attachment.

Upon the election of any officer of the Grand Encampment of Knights Templar of the USA, he will be presented the Knight Grand Cross of the Temple (KGC) following his Installation into office, unless he is a current holder of the same. His patent and jewel are presented at no cost to him. Should a death occur in the elected line and an appointment made to fill a vacancy, the same shall apply, with the KGT being presented at the Installation of the new officer appointed by the grand master. Additional Knights Grand Cross of the Temple may be nominated by any mem- ber of the College of Honors but must carry the unanimous approval of the active members. All active members must give their approval before any KGT may be awarded, either orally or in writing.
The total number of Knights Grand Cross is set at twenty-four, not counting elected or appointed officers of the Grand Encampment, per an original decision by MEPGM Thornley. The original decision delineated “officers or past officers of the Grand Encampment” would not count in the twenty-four total. Accordingly, department or past depart ment commanders are not counted toward the total of twenty-four. The Investiture of Knight Grand Cross of the Temple is performed by the grand master of the College of Honors, or by a member of the College of Honors that he so des ignates. The jewel of a KGT is shown on the previous page and is worn on the left side of the recipient’s uniform. 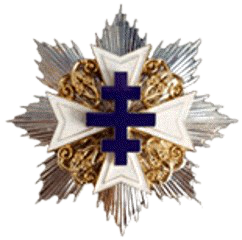 Right Eminent Sir Knight Marshall, KYGCH(3), KGT, 33°, is a past grand commander of the Grand Commandery of Knights Templar of Alabama and a member of the Editorial Review Board of the Knight Templar magazine. He can be reached at geomarsh@yahoo.com