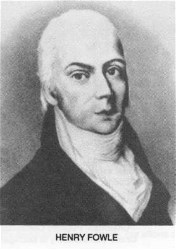 Henry Fowle, one of the early leaders of Templary in Massachusetts, was born at Medford, Massachusetts, on September 19, 1766. His schooling was limited and ended with the beginning of the Revolutionary War. For a time he worked with his father in the tailoring business, but the close confinement did not agree with his health. In 1783 he entered into an apprenticeship with Mr. Richard Skillen of Boston, a block and pump maker. He found this work quite agreeable, and in 1788 was able to purchase tools and set up his own business. After some reverses the business prospered, and in 1815 he took his son, Henry, into partnership.
On November 1, 1789, he married Miss Elizabeth Bently. Thirteen children were born before she died in January 1811. The next year he married Miss Mary Adams, who passed away three years later during the birth of their first child. In January 1815, he married Miss Ruthy Skimmer, and six children were born to that union.
In 1827 he became crippled with rheumatism, which was to incapacitate him during the rest of his life. He finally sold his business to three of his sons; Henry, William and Joshua. They were to make monthly payments to him as long as he lived, but after two years when business became dull, they broke the agreement and sold out the business. This left him without any income. He moved to Jamaica Plains but in 1830 returned to Boston where he remained until his death on March 10, 1937. His later years were very difficult because of his poverty and failing health.
Fowle was made a Mason in St. Andrews Lodge in Boston in 1793. He received the Entered Apprentice Degree on April 11th, the Fellow Craft Degree on June 17th, and the Master Degree on August 2nd. Soon afterwards, he was the Junior Warden and two years later became Senior Warden. In 1800 he was one of the petitioners for Mount Lebanon Lodge and was its first Worshipful Master. The work and lectures used in this new Lodge were revised by Fowle, who felt that many improprieties and errors had crept into the work as it was generally conferred in that vicinity. This work had the approval of the Grand Lodge and Grand Master Isaiah Thomas offered Fowle a salary of one hundred dollars a month if he would teach this work throughout the jurisdiction. A little later he reaffiliated with St. Andrews Lodge and became the Worshipful Master, which office he held for six years. In 1801 he was appointed Junior Grand Deacon of the Grand Lodge of Massachusetts and became Senior Grand Warden in 1809. When Francis J. Oliver was Grand Master in 1817, he served as Deputy Grand Master for the third Masonic District.
On January 28, 1795, Fowle received the Mark, Past, Most Excellent and Royal Arch degrees in St. Andrews Chapter. In 1804 he was elected High Priest and was reelected annually until 1808. He was Deputy Grand High Priest of the Grand Chapter of Massachusetts for eight years and when elected Grand High Priest declined to accept the office. In 1798 he was a delegate with Benjamin Hurd and William Woart to the convention at Hartford, which resulted in the organization of the General Grand Chapter. On June 6, 1816, he represented the Grand Chapter of Massachusetts at the fourth meeting of the General Grand Chapter held in New York. At the next Triennial meeting in 1819 he attended as Deputy Grand High Priest of Massachusetts and was elected Deputy General Grand High Priest of the General Grand Chapter. Due to ill health he was not present at the meeting in 1826.