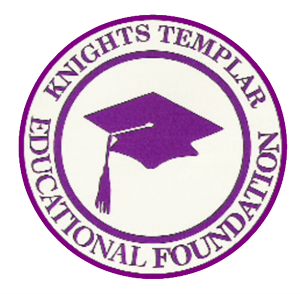 Mission Statement:
The Knights Templar Educational foundation Committee considers all applications for scholarships, without regard to age, race, religion, National origin, gender, of Masonic ties or affiliations. These scholarships are not “grants in aid”, but are open to all students regardless of their financial circumstances.

Purpose:
Provide financial assistance to students who meet the required qualifications, which may vary from state to state.

How to apply for a grant:
Application forms are available from the office of the Grand Recorder of the Grand Commandery of each Division or Division Chairman.

History and transition of the Knights Templar Educational Foundation:
In 1922, the Grand Encampment launched the Knights Templar Educational Foundation with the words: “We feel that the Grand Encampment can build no greater monument nor inaugurate a more worthwhile movement than to establish a plan which will put into effect a plan which will provide educational advantages for the youth of our beloved country, thereby enabling them to become more useful members of society and better Citizens of the United States of America.

The Foundation was sustained and perpetuated by each Sir Knight paying annually the sum of $1.00 for a period of nine years beginning July 1, 1924. This Fund became available for student loans.
Through the years the fund has grown and Grants and Scholarships are available in several states. However, some states still continue to use the Loan program where the student is expected to repay the loan at a low interest rate. States have either Grants or Scholarships or Loans but not both.

The need for Education Education beyond high school is essential in a technological age. It may be obtained today in –
1. A vocational school, which trains artisans and craftsman.
2. A technical school, which prepares technicians for various specializations.
3. A professional school, which offers preparation, in medicine, law, theology, engineering, business, agriculture and others.
4. Colleges and university, which give a firm foundation for business, trade or profession.

The Record Since its founding the Knights Templar Educational Foundation has assisted more than 80,000 students for an aggregate monetary value of over 38 million dollars through Loans and Scholarships to deserving youth thereby exemplifying the purpose and principles for which it was created.

Who are the Knights Templar?
The Knights Templar is a Christian oriented fraternal organization and is the culmination of the York Rite of Freemasonry. this fraternal organization does not claim to be a direct descendent of the ancient order founded in the 11th century but their service in these times reflects the virtues of the Valiant Knights and serves those in need today through charities and support of higher education.